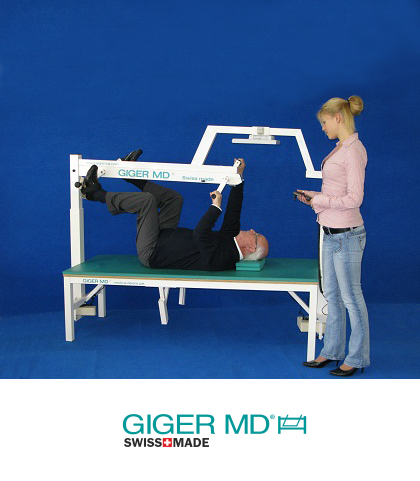 Parkinson’s disease is a widespread disease, which is accompanied by severe physical and mental impairments. It is regarded as incurable and drug treatment is often associated with unpleasant side effects.

GIGER MD® therapy provides those affected with a scientifically recognized way to significantly slow down the progression of the disease or even stop it altogether and regain long-lost abilities. The key is regular exercise with sophisticated GIGER MD® therapy instruments – this is gentle, painless and feasible for anyone.

Create new neural connections through regular training. A diseased central nervous system (CNS) is widely regarded as beyond repair. Those affected are usually left with the prospect of having to live with the serious consequences.

GIGER MD® therapy is based on scientific evidence that it is possible to create new neural connections and to program the brain to embrace new movement patterns. Through coordinated and guided movements, the central nervous system can be reorganized. For those affected by Parkinson’s, this is a way of influencing the course of their illness in a targeted manner and regaining long-lost skills to a certain extent (for example: a normal gait). Numerous scientific studies have demonstrated the effectiveness of this method – even in seemingly hopeless cases.

GIGER MD® therapy represents one possibility of obtaining and recovering the highest possible quality of life despite Parkinson’s. In addition, those affected can often reduce their drug dosage, thus reducing the associated side effects.

How long are sessions?

Sessions will last between 15 and 25 minutes.

How do I prepare? What should I bring?

Wear comfortable clothing. You don’t need to bring anything with you.

How often should I go?

Patients have experienced results after a single session.

Regularly scheduled sessions (1 to 3 times per week) are recommended for continued improvement and sustained results.

What is the cost?

How do I make an appointment?